What Are LED PCBs?

What Are LED PCBs?

Light-emitting diodes, more commonly called LEDs, are an increasingly popular technology for lighting across various industries. LEDs are a type of solid-state lighting that converts electricity into light using a semiconductor. Compared to traditional light bulbs, they reduce energy use by as much as 80% and last up to 25 times longer. They also offer other advantages, such as their small size and environmental friendliness.

Printed circuit boards are a technology that plays a valuable role in supporting LEDs. These are thin boards made of fiberglass, metals or other materials that electrically connect electronic components. These boards, often called PCBs, are essential to many LED applications. They may physically support the LEDs and transfer heat away from the bulbs to enhance their performance and prevent them from becoming damaged.

The Basics of LED PCB Design

PCB LED boards come in several variations that are ideal for different applications. How do we make PCB LED systems, and what features do they offer?

Depending on the application of the board, PCB manufacturing involves using various materials, designs and setups. One of the most critical aspects is the material composing the core of the circuit board.

Some common PCB core materials include the following.

Because of the vital role of heat transfer in LED PCB applications, metals, especially aluminum, are the most common LED PCB materials.

Aluminum PCBs are the most common type of LED PCB. These boards sit on an aluminum alloy base, which often consists of aluminum, magnesium and silicon. These LED PCB materials alter the properties of the material to help meet the needs of each application.

PCBs have different numbers of these layers, depending on the board’s design.

There are several types of aluminum LED PCBs, which offer different characteristics that make them ideal for various applications.

There are two primary ways to attach electronic components, and sometimes LEDs, to printed circuit boards. These two PCB assembly techniques are as follows. 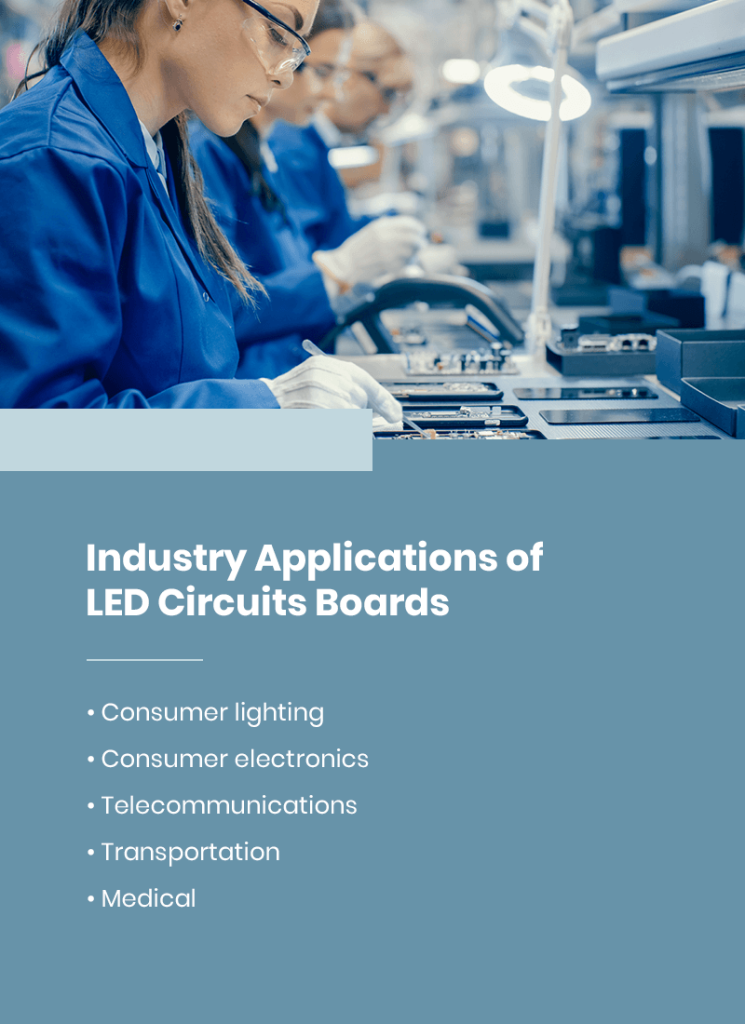 The Benefits of LED Circuit Boards

LED lighting and LED PCBs offer numerous benefits that make them useful in many applications. Some of these benefits include the following.

Benefits of Aluminum for LED PCBs

Aluminum is one of the most popular LED circuit board materials because it has many properties that are ideal for LED applications. Perhaps the most valuable feature of aluminum LED PCBs is their excellent heat transfer capabilities. Consistently high temperatures can damage electronics and LEDs and diminish their lifespan and performance, including the quality and color of the lights. Because of these risks, electronic devices must have adequate heat transference — a term that refers to how well thermal energy, or heat energy, can move from place to place. Aluminum conducts thermal energy relatively easily, which enables it to transfer heat away from components such as LEDs.

Aluminum’s heat transference capabilities make it possible to mount more LEDs on each board. Because LEDs generate heat, having too many can cause too much heat to build up. Using an aluminum PCB, however, allows you to increase the number of LEDs without sacrificing performance. Also, the longer you use an electronic appliance, the hotter it gets. Improving heat transference enables you to operate your device for longer, even continuously, and increases the overall lifespan of the LEDs and the gadget.

Some of the other benefits of using aluminum for LED light circuit board design are as follows.

Working with a company that’s experienced in LED PCB assembly can help you take full advantage of all of the benefits LED PCBs have to offer. LED lights are temperature-sensitive, and LED PCBs can require complex designs, so you need a company with the expertise and world-class equipment to assemble them. EMSG has been working with LED lighting since the technology’s earliest days, so we have the knowledge and skills to help you meet your PCB LED goals.

At EMSG, we have a 20,000-square-foot facility outfitted with the latest PCB assembly equipment, which enables us to meet the unique needs of your project efficiently and economically. Our range of manufacturing capabilities enables us to produce custom LED PCBs, including two machines that can populate four-foot continuous LED circuit boards. We offer surface mount and thru-hole assembly, box-build assembly and more.

We are also ISO 9001-certified and FDA-registered, and we keep up with the latest electronic assembly developments and requirements to ensure we can provide optimal results to our clients in York, Penn., Baltimore, Md. and other cities in the area.

LEDs are increasing in popularity due to the many benefits they provide. At EMSG, we can help you take advantage of this technology with high-quality, timely PCB assembly services. To learn more, contact us online or call us at 717-814-3220 today.

We Want to Work with you!

We make it a point to make sure that what we deliver is exactly what you want.